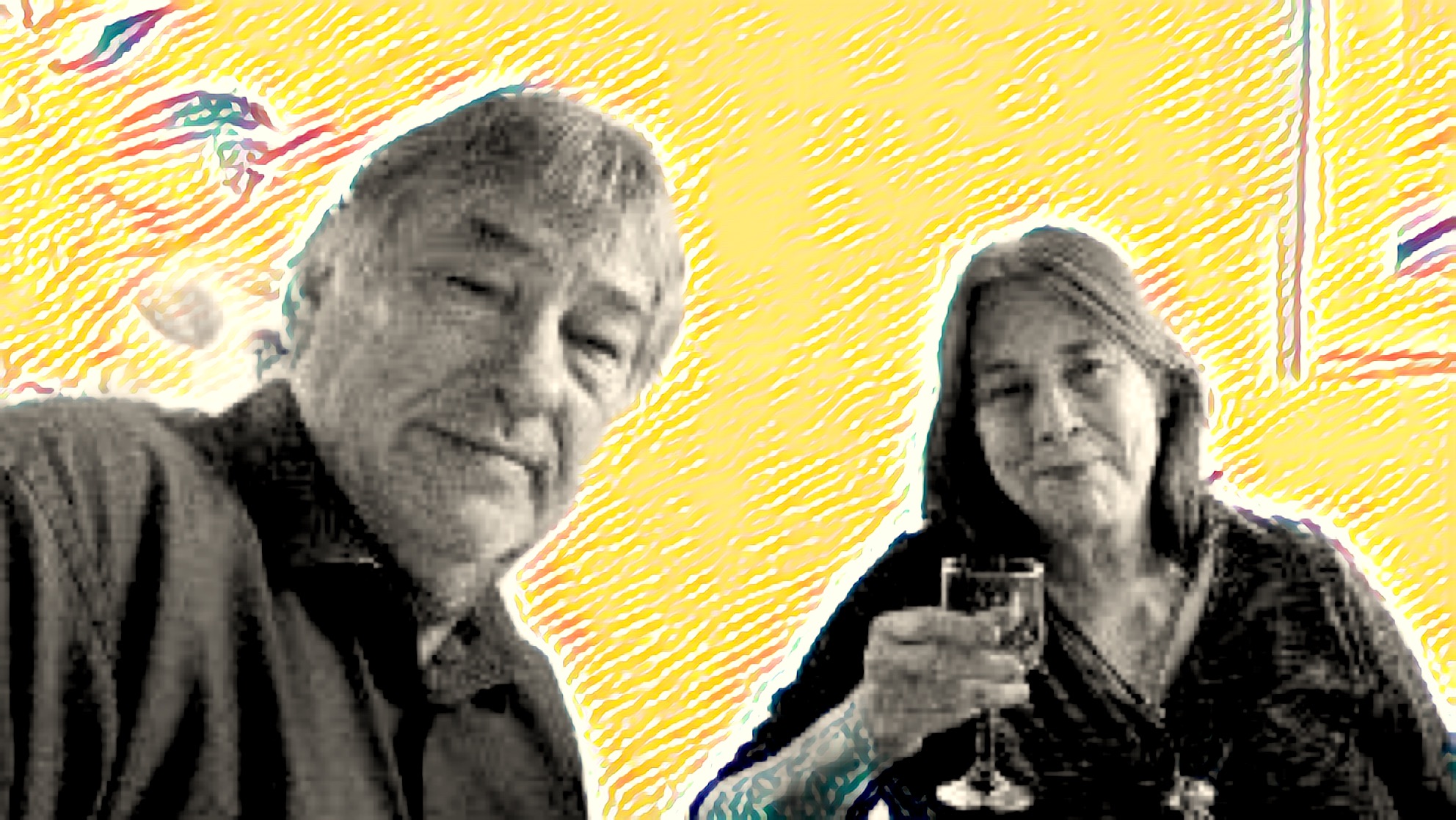 Adrian, together with Bridget

2021 Adrian Plass is an Anglican, born in Tunbridge Wells.  He trained as an actor at the Bristol Old Vic Theatre School, where he met Bridget. They worked as residential child care workers with disadvantaged children for many  years before Adrian suffered a breakdown and subsequently embarked on a career as a writer and performer. They settled in Hailsham East Sussex until, in 2009, he and his wife Bridget moved to North Yorkshire to join the Scargill Community based at Scargill House, a conference, holiday and retreat Centre, where they lived and worked for three years before moving even further north to County Durham.

Adrian actually began to write as a gentle form of therapy. His first piece of work was “The Visit”, a novella in which a fictional local Church in England is visited by Jesus (published in England originally as part of the short story collection The Final Boundary, and as a stand-alone illustrated edition in 1999). The German translation of this novella, “Der Besuch”, was made into a 40 minute film in 2006. Adrian greatly enjoys his frequent tours of Germany. Another early work was a novel, Broken Windows, Broken Lives, a fictional account of early experiences when working with children who were dealing with a variety of problems..

His most well known book remains The Sacred Diary of Adrian Plass (37 3/4) which has sold over a million copies world wide, and is the first in a series of gently satirical novels about the hapless attempts of his central character to be a better Christian. It began life as a column in Family Magazine, which is why the central character bears his own name. It is also why this Adrian has a wife called Anne and a son called Gerald, which has caused some confusion over the years as Adrian's one and only wife has always been Bridget and they have four adult children, none of whom are called Gerald!

Adrian has at present written 36 books including three with Bridget and two with Jeff Lucas. He is perhaps proudest of his book of collected poems, Silences and Nonsenses but he has a special affection for Looking Good Being Bad which he says still makes him laugh! His favourite book is usually the one he is writing at the time.

Adrian and Bridget are still members of the Scargill Community and still intensely involved, especially in contributing to the programme, but Adrian now has space again in which to write.

2013 saw the publication of the latest in the ever popular Sacred Diary series Adrian Plass and the Church Weekend and Seriously Funny 2 with Jeff Lucas.

2013 also saw Adrian joining Jeff  for more Seriously Funny tours and Bridget and Adrian touring 'Riding the Storm' with Dave Bilborough, in association with the Sailors Society, as well as many other individual gigs around the UK including Spring Harvest and Greenbelt.

2014 included the genuinely fun  tour with Searchlight Theatre Company and World Vision, some great times with Rob Halligan and lots of continued involvement with Scargill House.  It  was also  a year dogged with illness including a minor stroke in June but it was a period when Adrian and Bridget experienced wonderful support from family and friends and understanding from many organisers of events  that they reluctantly had to cancel.

2015 proved eventful as Adrian and Bridget resumed some speaking engagements. Fairly chronic back pain has put paid to some events  but there has been  lots of fun including touring with Searchlight Theatre and leading events at Scargill House. The Autumn saw the publication of his new book with Jeff Lucas All Questions Great and Small with a four day tour to launch it.

2016 saw Adrian and Bridget firmly back in the saddle! A wonderful two months in Australia, lots of individual engagements , the tour HEROES with Searchlight Theatre and Scargill House ,a day on set during the making of the film Silver Birches, based on Adrian's book of the same name and a tour of Israel being some highlights. Adrian's back continues to give him a great deal of pain and the stroke in 2014 means he needs to rest more but it was a good year and his greatest triumph was probably finishing The Shadow Doctor, published in February 2017.

2017 also saw Bridget and Adrian on tour with Searchlight Theatre celebrating 30 years since the first Sacred Diary was published with OUT OF HIS HEAD. The tour is to be repeated in 2018. which will also see the release of the film Birches, strongly based on Adrian's novel Silver Birches.

August 2018 was a significant month for the Plasses as not only did Adrian celebrate his 70thbirthday but also their daughter Kate got married. Wonderful laughter- filled memories for family and friends.

Adrian and Bridget, while no longer members of community, continued to lead several events as part of the Scargill House programme. They also toured with Searchlight Theatre, and took part in a SGA camp in Debrecen Hungary, a publisher’s evening in Budapest, lots of individual church entertainment evenings in the UK and led several varied and very interesting church weekends .  In addition Adrian dragged himself kicking and screaming to the end of his latest book, a sequel to The Shadow Doctor, entitled THE PAST IS WAITING which is to be published in April 2019.

For all the Plasses a year filled with unusually consistent happiness.